Many of us have heard of the Braille Alphabet and know it as the universal method of writing used by the blind or visually impaired. However, not a lot of people, especially those who are blessed with the gift of sight, know about the person behind this ingenious creation. Maybe there are a handful of people who knows and recognize him, but not enough to give him credits befitting the enormity of his contribution to the community of the blind. It is with this reason that the U.S. Mint created the Braille Commemorative Silver Dollar Coin to honor Mr. Louis Braille, the French creator of Braille Alphabet, in his 200th birth anniversary. 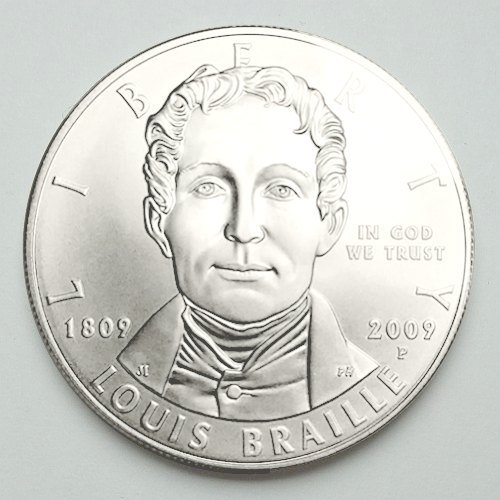 The Braille silver dollar is the first U.S. coin to bear legible Braille letters BRL, which is the abbreviation for Braille. Yes, other Braille designs were already used on a few U.S. coins a long time ago. It is seen on the Paralympics Commemorative Dollars in 1995 and on the quarter coin of Alabama in honor of another famous blind person, Helen Keller. However, the Braille designs on those coins are not really readable for they are too small to be touched and felt.

Unlike the “BRL” Braille letters on the reverse side Louis Braille Commemorative Coin, which are very prominent. Under these bold letters is the image of a blind young boy reading from a Braille book. Behind the boy is a bookshelf with an inscription that says, Independence. This meaningful design was made by Susan Gamble and sculpted by Joseph Menna, then sculptor of the U.S. Mint. 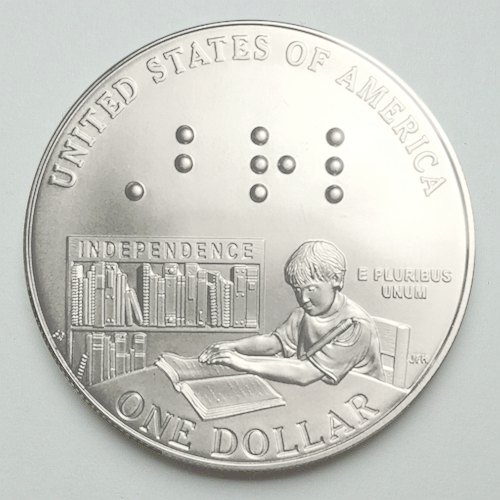 On the obverse side of this silver coin, you will find a nice portrait of the genius himself, Mr. Louis Braille together with other standard designs on a dollar such as a phrase “In God We Trust”. This design was crafted by Mr. Joel Iskowitz and the actual sculpture of the image was done by Phebe Hemphill.

The silver Louis Braille dollar coin was minted in Philadelphia and was released to the public in March 2009. It is 1.5 inches in diameter and made of 90% silver and 10% copper. The coin weighs approximately 26 grams. The U.S. Mint produced a maximum of 400,000 pieces of this commemorative coin in both proof and uncirculated versions and sold them to coin collectors from all over. The National Federation of the Blind benefitted 10% of the total sales of these coins. This thoughtful act by the U.S. government was also aimed at promoting literacy among the blind, which was the living advocacy of Mr. Braille himself.