One of the major setbacks in starting a silver coin collection is the risk of getting scammed by fraudulent coin dealers and spending a fortune on fake silver coins. This is a very reasonable fear or at least a rational concern. In any kind of endeavor, there are always people trying to take advantage of the naiveté or inexperience of other people. Silver coin aficionados can avoid this by knowing the difference between fake and genuine silver coins.

Question: There are three coins on this picture, all French Napoleon III coins, can you spot the counterfeit? 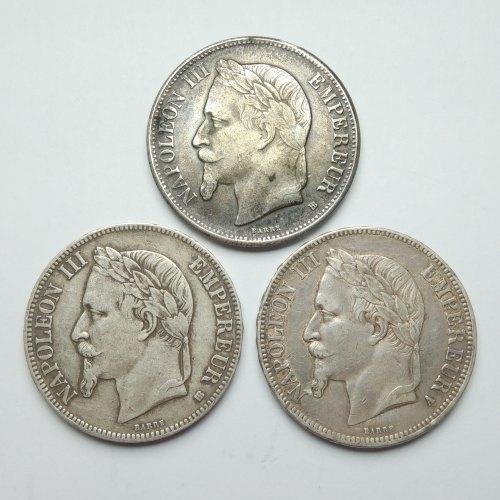 There are collectors who can readily tell when a coin is fake, even the most sophisticated fraudulent ones, without being able to explain why. By mere gut feelings, they can tell that something is wrong in the coin and they’re usually right. However, that kind of intuition takes a long time developing but knowing the basics helps a lot. First, you should be familiar with the look and feel of genuine silver coins. Acquaint yourself with the qualities of a silver coin – its markings, its texture, it’s surface, its edges, its weight, etc… Try to memorize the feel of a real silver coin in your hand. Do this with as many different samples of silver coins as you can. This can take time but it would be very beneficial to you in the end as you would be able to avoid scammers and losing money.

A genuine silver coin usually weighs more than a fake one because fakes are only made up of metal alloys. However, there are also silver-plated lead fake coins, which make them heavier than the genuine. So you also have to watch out for “overweight” silver coins. Counterfeit silver coins are usually dull and kind of soapy when compared to the genuine. Genuine silver coins are radiant and shiny. Another way to test the authenticity of a silver coin is by testing its sound when chinked with another coin. The dull clink sound of a fake coin is also a usual giveaway. Genuine silver coins have that distinctive ring of silver that sounds like a bell. It also pays to know your coin history. Try to learn which coins were minted at what year. Dates are a common mistake in coin forgery. So check the year minted on the coin if that kind of coin was indeed in circulation during that time. Also, some silver coins are reeded and some are not. So, learn which coins are reeded and which are not. This is also a common mistake by forgers.

And to give an answer which coin is the counterfeit one in the first picture, it is the upper coin. For those collectors who are familiar with French coins, this type of counterfeit coin can be easy detected because the rim is different and the words “Dieu protège la France” are missing as well, but 99 percent of the time you cannot see the rim at online advertisement!