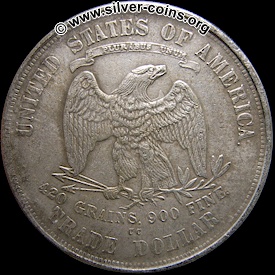 The reverse side on this counterfeit coin has the same details as used for other counterfeit trade dollars with a different date on the obverse side. If you see a similar coin with this date it is always a fake since there were no real trade dollars minted in the year 1799.